A PHP Error was encountered

Message: Only variable references should be returned by reference 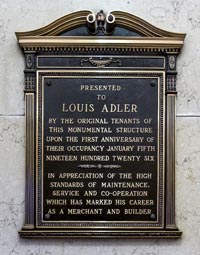 In 1925, Louis Adler built the 23-story iconic building as the embodiment of the creative spirit of its future occupants. At the time, he was recognized as one of New York City's leading real estate developers with a vision for inspiring industrial and financial growth and strength. The family of Louis Adler has owned and operated the building since 1929 and takes an active approach to ensuring that the building's quality and position in the market remain constant.

Robert Liberman, the grandson of Louis Adler and CEO of The Adler Group, Inc., along with his daughter, Kristin Fisher has consistently and rigorously maintained the building's adherence to the highest standards of quality in operating this type of property. The Adler Group owns and manages properties in Virginia and New York, including 654 Madison Avenue and 475 Tenth Avenue.

Installed by The Ravenna Company, the lobby mosaics feature bright trade symbols and buildings. The firm of Emil Frei, Inc., founded in St. Louis in 1898 was a leading company in the field of stained glass and mosaics in the United States. In the 1920's, Emil Frei was commissioned to design the mosaics in the new St. Louis Cathedral. Frei, in conjunction with the Berlin art glass and mosaic firm of Puhl U. Wagner, founded Ravenna Mosaics, Inc. (later known as The Ravenna Company) in 1924.

Many of Ravenna's important early commissions were executed in New York, including murals at Rockefeller Center, St. Bartholomew's Episcopal Church and Temple Emanu-El. 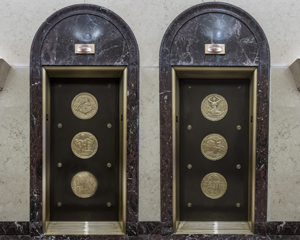 Designed by Gaston Lachaise, each of the four elevator doors depicts three zodiac signs. Lachaise was born in Paris, France on March 19th, 1882 and began studying sculpture by the age of 13 at the Bernard Palissey School of Applied and Industrial Art. He relocated to the US in 1906, where he played a critical role in the birth of American Modernism and helped redefine the female nude.

Lachaise worked in stone, metal and wood, but his most famous works were in bronze, such as the Standing Woman (1927). In 1931 he contributed art work to the GE building in Rockefeller Center, New York City, titled Gifts of Earth to Mankind. Lachaise's work was honored at the Museum of Modern Art in 1935 and featured posthumously in museums around the United States. 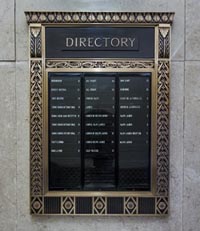 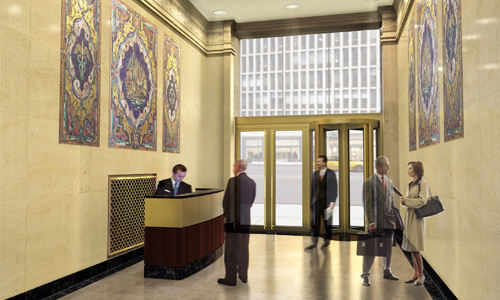